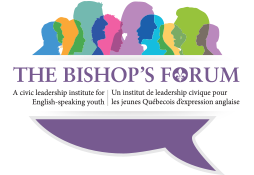 THE BISHOP'S FORUM
A Civic Leadership Institute for English-Speaking Youth

From August 12-17, 2022, the Bishop’s Forum will present an exciting program of speakers, workshops and activities that together offer participants a unique opportunity to understand and reflect upon the realities and promises of Quebec. Themes to be covered will include:

The Bishop’s Forum will look at what it means to be a Quebec citizen at this interesting period in the province’s development. Exercising political, social and legal rights in the province has changed fundamentally over the last few decades and Quebecers may be in store for further transformation in the years ahead as the world evolves in both intensively local and global ways.

The community sector, challenged in particular by government restraint, is finding new ways of making a difference in the lives of vulnerable Quebecers. So is the philanthropic sector which is increasingly using the tools of social innovation and social finance to leverage its donating power. The environment is always top of mind in Quebec and the opportunities to lead ecological transformation are many.

Quebec’s political system is simultaneously fascinating and frustrating. While having some of the developed world’s most progressive social policies, it is also the fulcrum of debate in Canada around how to address diversity. The Forum will look at these realities along with the manner in which the media engages in, and influences, political discourse in Quebec.

The Quebec economy is like no other in the country and its uniqueness is due, at least in part, to the nature of the relationship between the business sector and the government and the relatively strong presence of employee unions. These and other key themes including electrification of transport, the sharing economy and social enterprise will all be considered.

We’ll wrap up the Bishop’s Forum with presentations by each of the small groups established on Day 1 to a mock Parliamentary Commission made up of several Quebec luminaries. Groups will be asked to put their learning and insight from the Bishop’s Forum on display as they present changes they would like to see in Quebec society and and answer the Parliamentary Commissioners’ questions about their proposals.